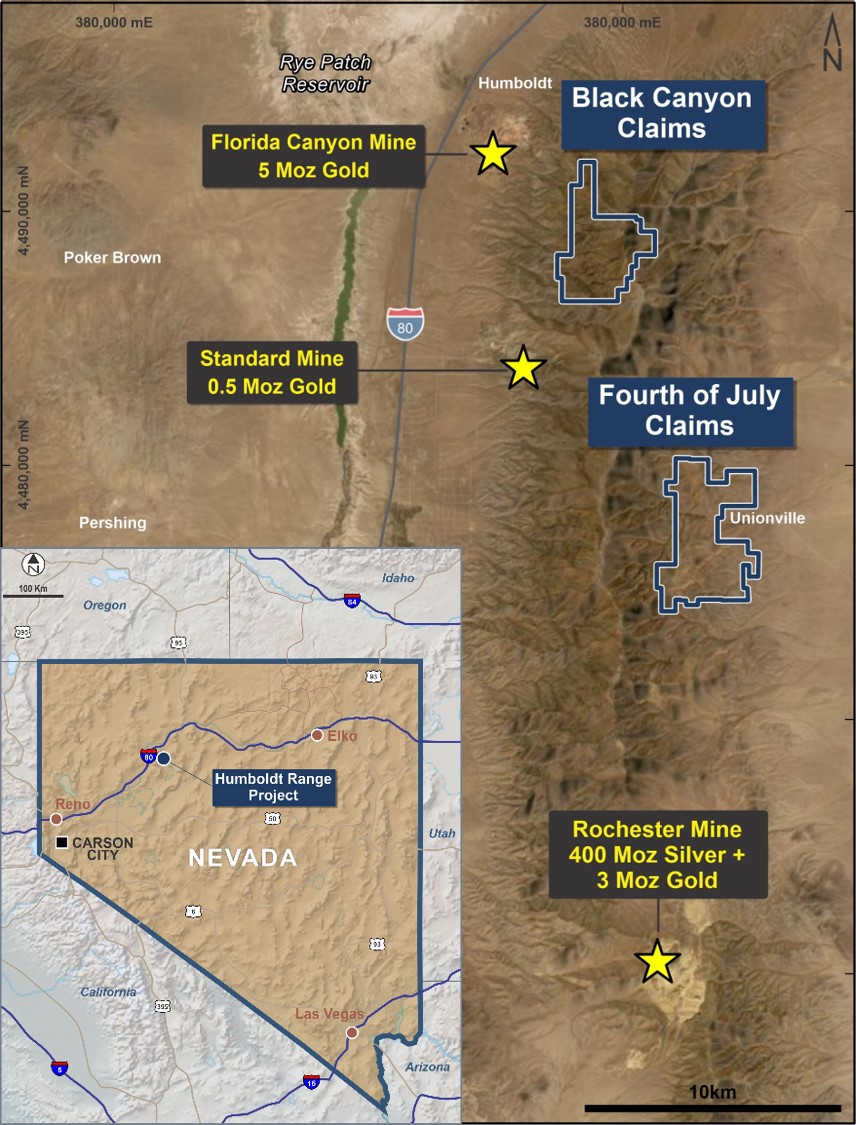 The Humboldt Range Project currently comprises 318 lode mining claims in Nevada in two claim groups: Black Canyon and Fourth of July and is situated between two large-scale active mines: the Florida Canyon gold mine and the Rochester silver-gold mine (see Figure 1). Access to the project is straightforward via roads off the I-80 Interstate Highway, which lies less than 15km to the west of the claims.

Widespread narrow vein mineralisation with visible gold occurs within the claims and was historically mined via numerous adits and underground workings between 1865 and the 1927. Mineralisation occurs in swarms of high-grade epithermal quartz veins of varying thickness (reported from 1cm to 3m), either as isolated veins or as broad zones of sheeted/anastomosing veins within zones of intensely altered and mineralised host rocks.

Nevada, USA was rated as the world’s best mining jurisdiction in 2021. It hosts some of the world’s most successful Gold, Silver and Copper mines with a mining and environmental framework supportive of best-practices mining.

PolarX acquired the project in 2021, extended it twice and immediately conducted the first comprehensive soil sampling program in almost a century.

Black Canyon is at the northern end of Humboldt Range and is less than 3km from and overlooks the currently operating Florida Canyon Mine, which hosts 5Moz Gold. 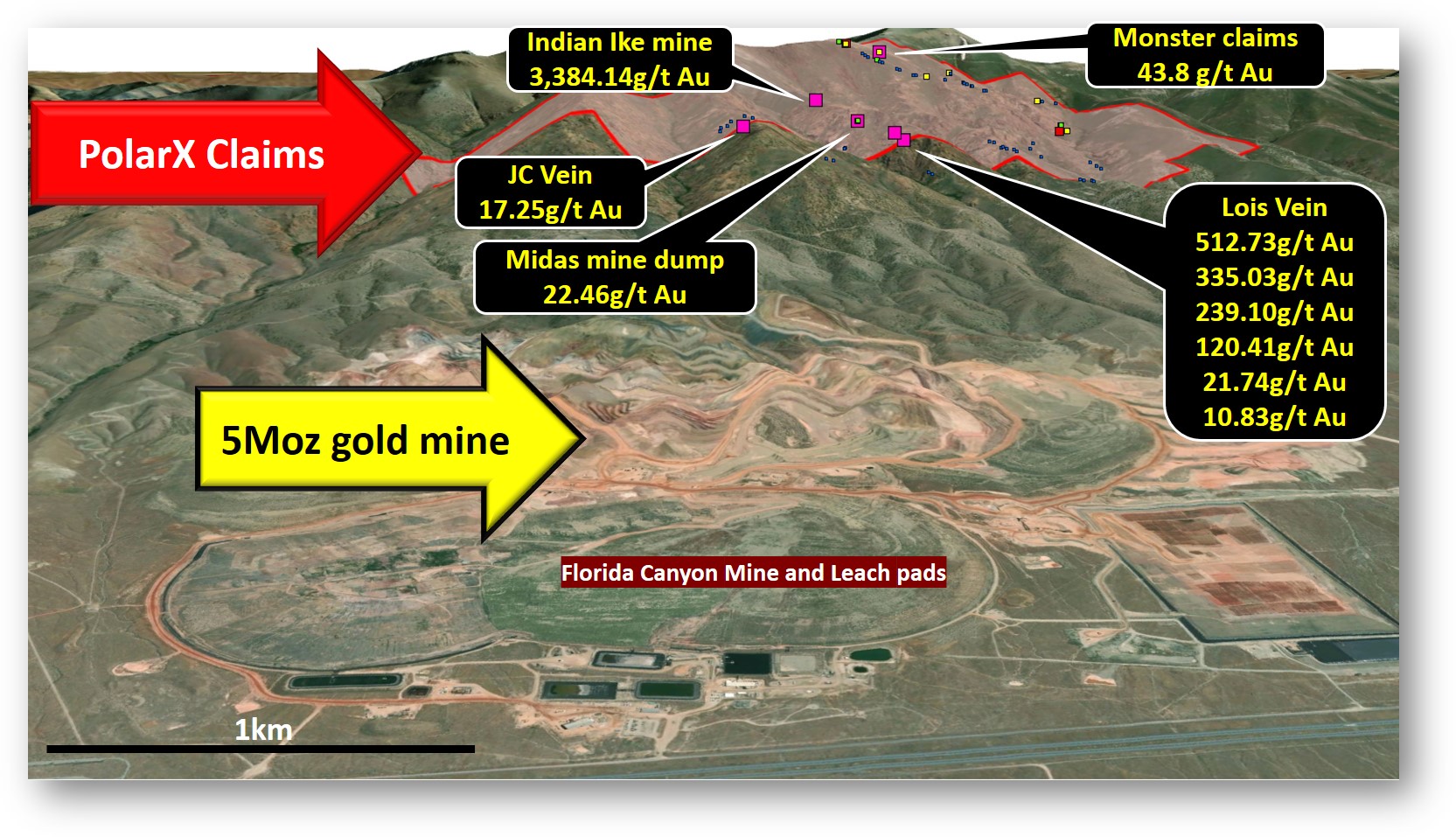 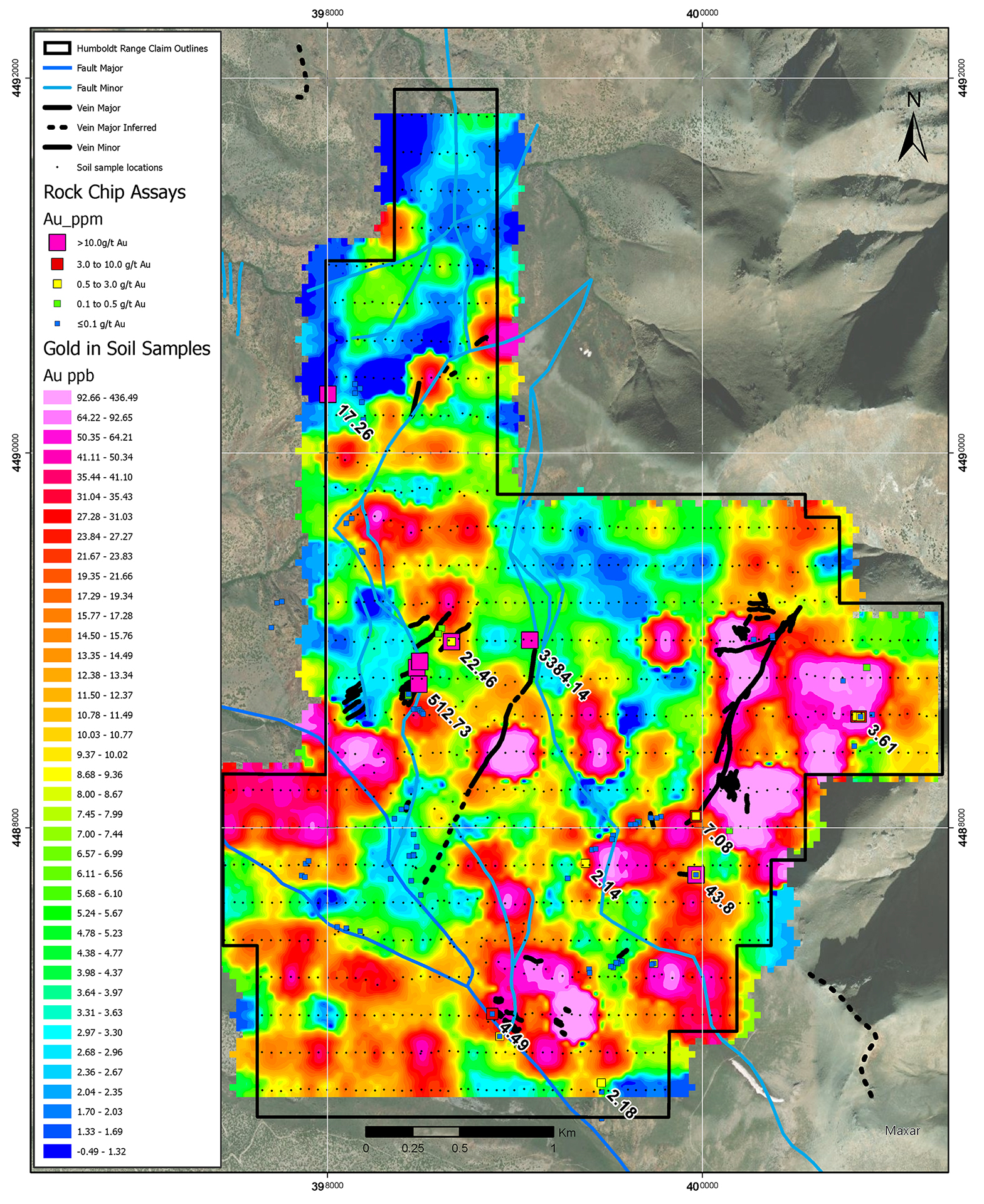 Eastern anomaly: is the largest soil anomaly and measures 2,300m long and 800m wide. This anomaly is associated with outcropping mineralised quartz veins on a steep east facing slope which has never been previously sampled. The vein system has been mapped over a length of at least 1,300m with veins samples from its southern end assaying 7.8g/t gold. Another vein 250m away returned an assay of 43.8g/t gold from a narrow quartz vein associated with old workings.

Maximum gold-in-soil values of 793.1ppb and 782.1ppb occur in this anomaly. The eastern part of the soil anomaly has no outcropping quartz veins but does contain minor historic workings. Field validation of this entire anomaly will occur in mid-September 2021 to plan specific drill targets.

The western and southern soil anomalies each exceed 1,300m length and are between 300m and 500m wide. Key attributes of each are:

Each of these three anomalies has large scale which may indicate bulk-mineable targets like the nearby 5m oz Florida Canyon Gold Mine, which lies within only 3km to the NW (Figure 3).

Figure 3. Oblique 3D view of the Black Canyon claims showing gold grades in g/t and proximity to the large 5Moz Florida Canyon gold mining and heap leach operation – within only 3km to the west of PolarX’s claims. 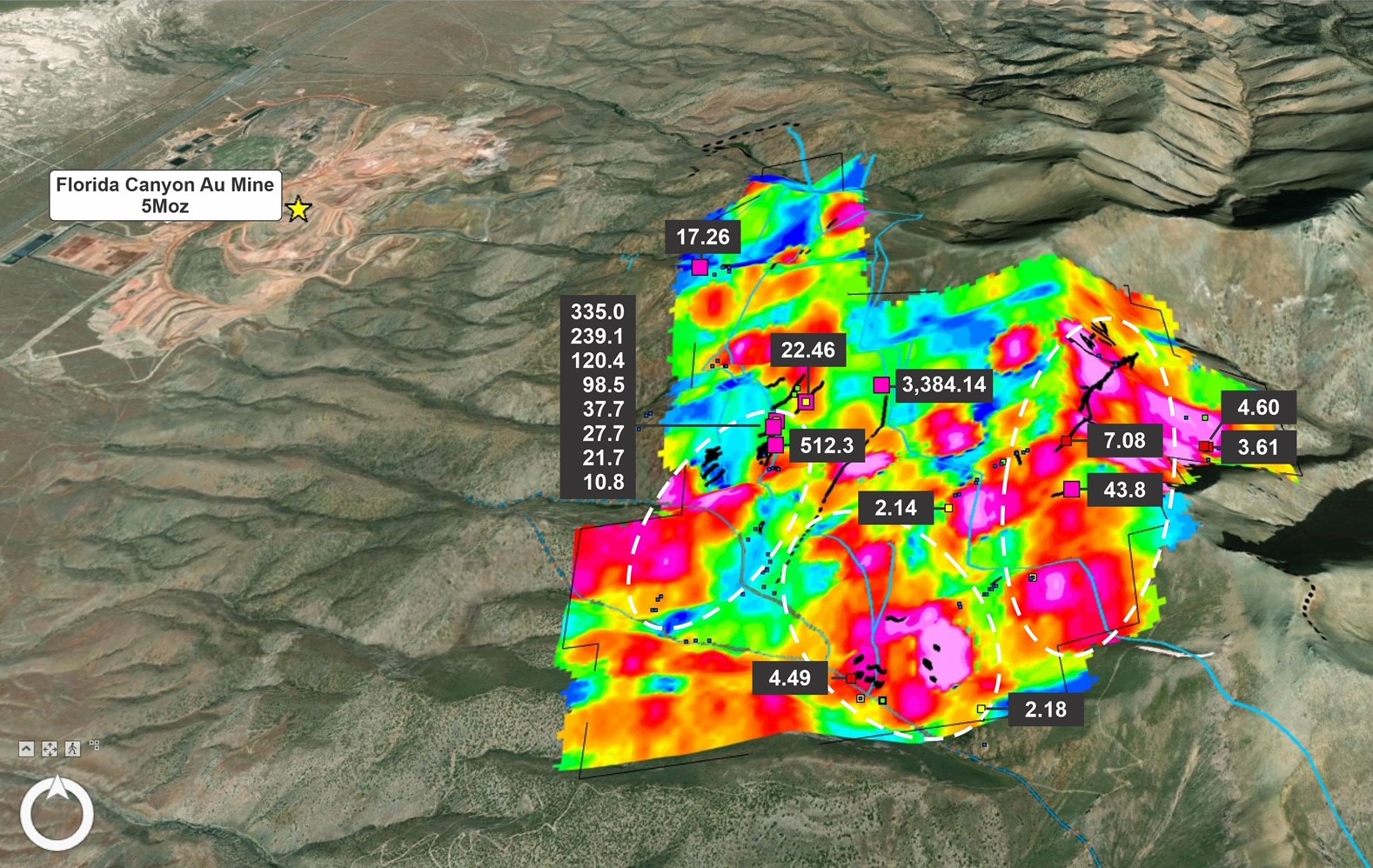 Fourth of July is at the southern end Humboldt Range and is less than 15km from the impressive and currently operating Rochester Mine, which hosts 400Moz silver and 3Moz gold (Figure 1 ).

Soil sampling on an E-W 200m x 50m grid was conducted by PolarX during 2021 covering most the Fourth of July claims in the Humboldt Range Project. This program complements detailed soil sampling previously undertaken by Renaissance Exploration Inc over part of the project area in 2014/2015, which has since been validated by PolarX and incorporated into the project database (refer Appendix 1 JORC Table 1).

A prominent, large silver anomaly occurs in the south-west part of the claims (Figure 2), associated with two major N-S striking faults which form the Arizona Graben. The silver anomaly is over 3.5km long, up to 2km wide and has a peak value of 186g/t silver in the soils. Rock chip samples from quartz veins within the anomaly (reported to ASX on 27 May 2021) show high to very high levels of silver, with many samples containing more than 1,000g/t silver. Very limited historical RC drilling (7 holes by Renaissance Exploration Inc in 2015) has been undertaken within this silver anomaly, which remains effectively untested. 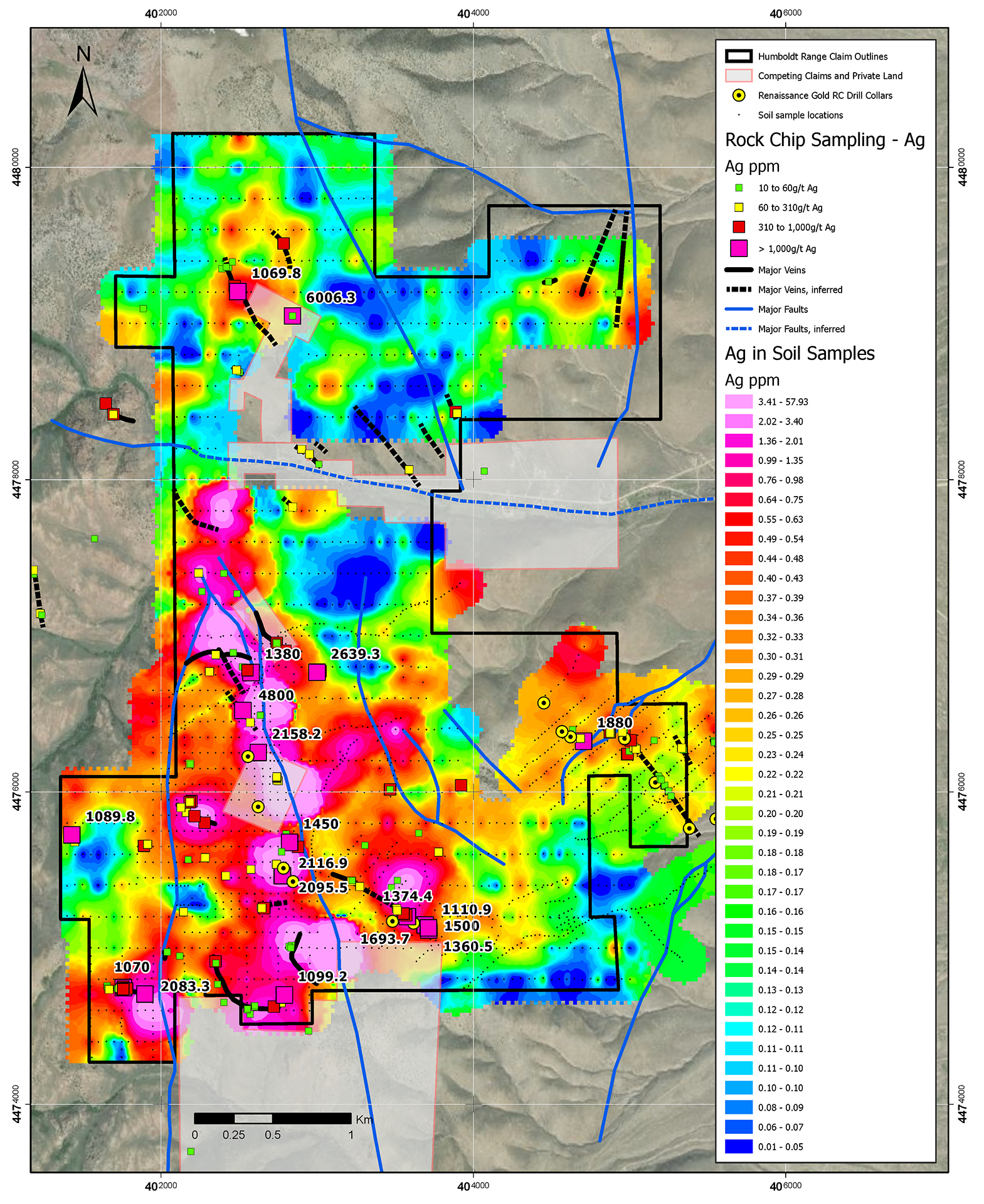 Gold is also highly anomalous in the soil sampling in the Arizona Graben, particularly along the fault margins (Figure 3), also with strong supporting rock-chip samples from veins, with several samples over 10g/t gold, including a maximum of 76.0g/t.

There are also several other gold anomalies delineated in the soil samples. In some cases, these can be related to known veins and structures, but in other cases (for example, the extreme SE of the sampling grid), the gold anomalism represents new, previously undiscovered targets with no known surface expression (Figure 3 below). 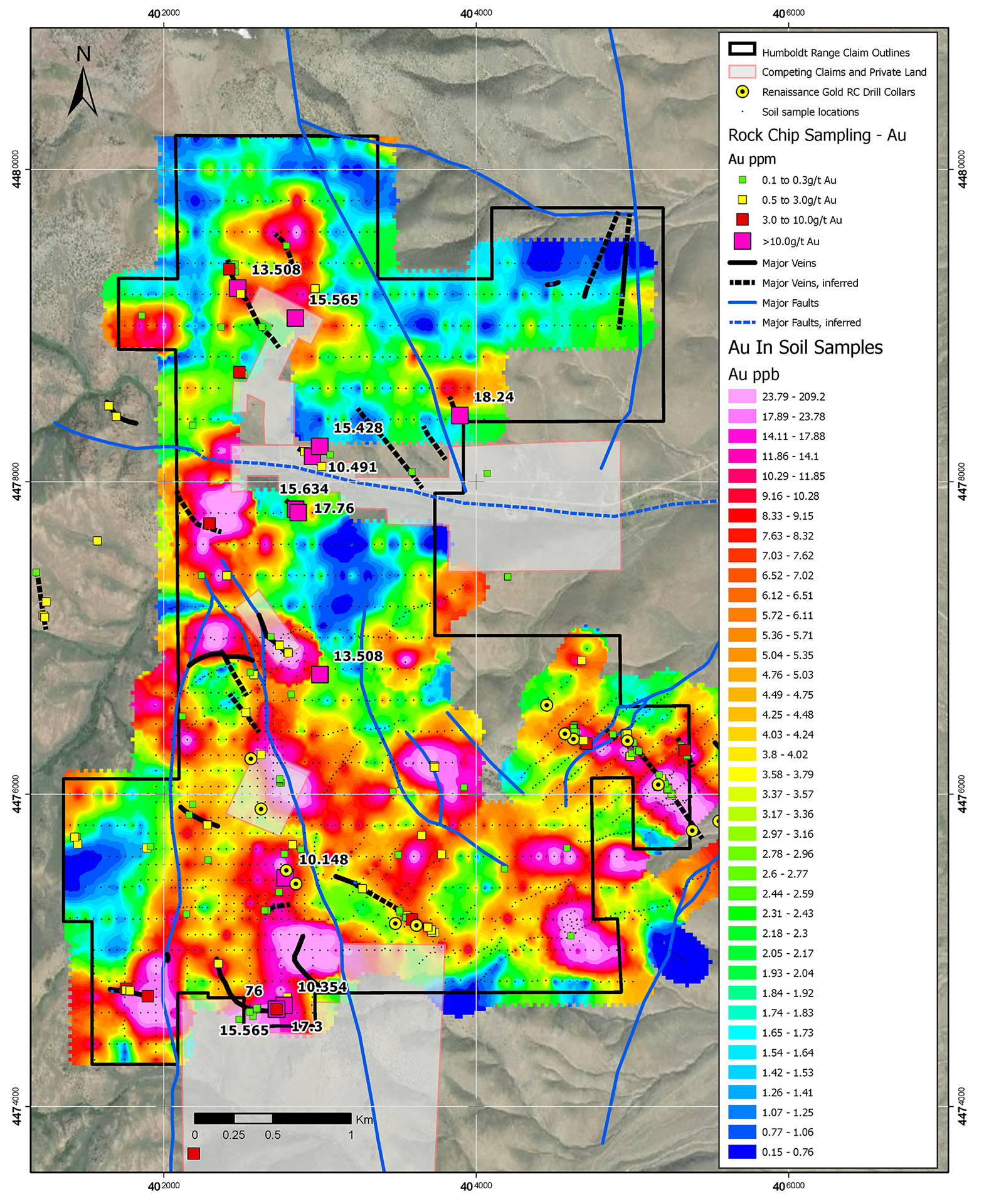 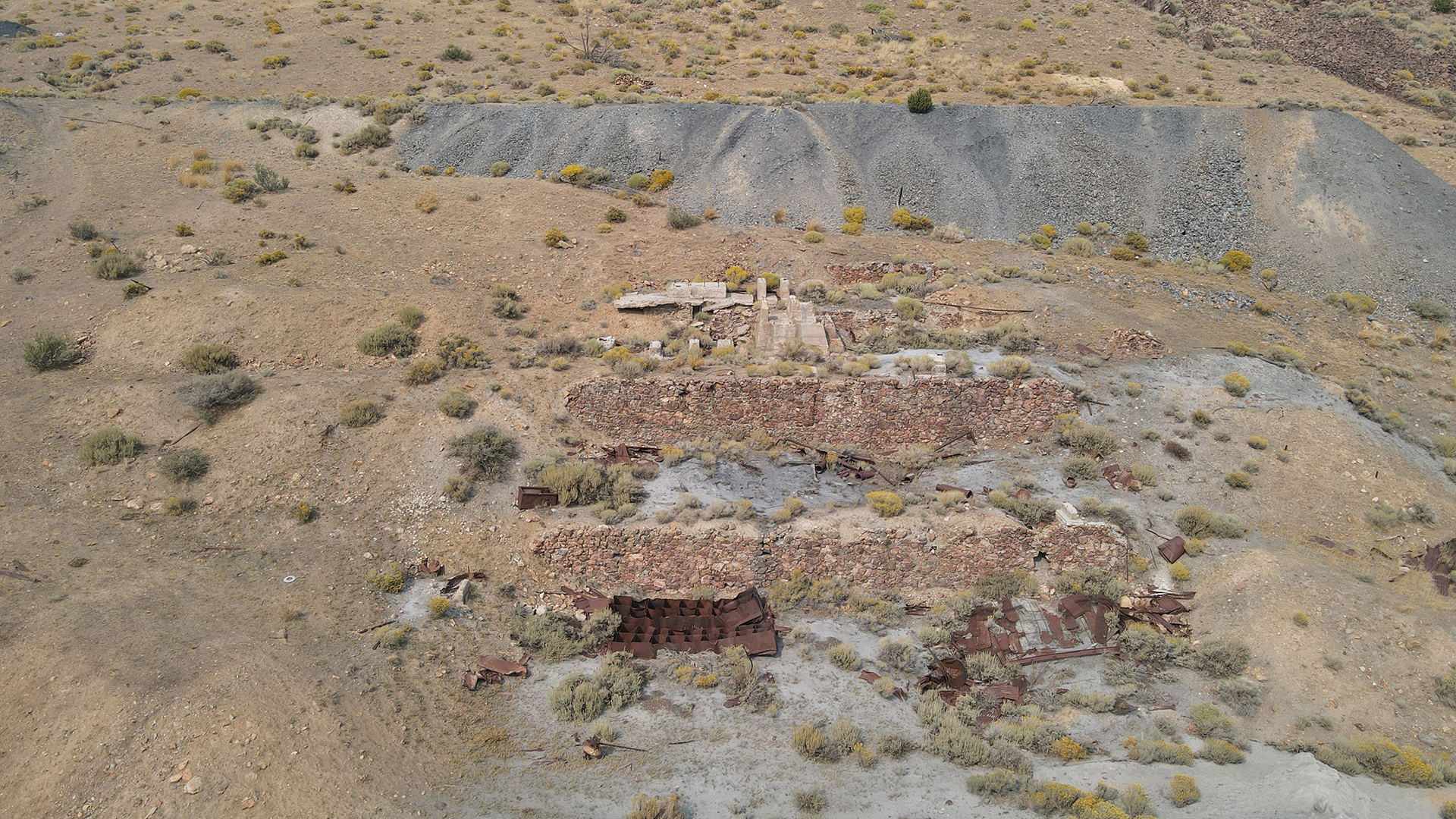